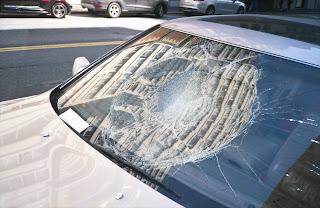 I was recently told about an incident in which a woman and a young child were assaulted while in the car.

The assault was on the car, rather than the persons, but I’m told it can be classified as a criminal assault.

I’ll give a brief description: The driver was driving down a one-way street in a London residential area and stopped to tell the driver of another car travelling the wrong way down the street of his mistake. It was just after 12 noon. So far, so uncontroversial.

Now’s the worrying bit. To the original driver’s surprise and shock, a passenger jumped out of the car in the wrong, started screaming obscene insults and verbal abuse and telling the female driver to “F*** off” out of the way. He was also holding what looked like a giant electric screwdriver and was gesticulating with it as if he were about to use it - perhaps thrusting it through the partially open window.

At this point, the female driver froze. That was the amygdala part of her brain doing what it’s supposed to do - reacting purely emotionally to an unknown threat. This is a natural response to those who are aware of the “flight, fright or freeze” response we all of us will have when confronted with something threatening. What’s really of interest is how each of us do respond in reality. We may think we know what we’ll do. We rarely do.

That’s why people in conflict zones are trained in how to cope with a particular situation. The idea is that, if they are forced to confront the situation enough, it will become second nature. Their amygdala/reptilian response will thus be partly controlled by the hippocampus (which deals with memory of past events) part of the brain to allow their instant reaction to be bypassed. 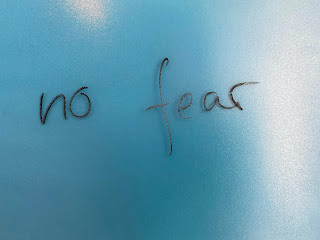 In this case, it didn’t happen. As the woman froze - and therefore did not instantly drive away - another man leapt out from the back seat of the car and hit the top of the car violently with another menacing and unknown electrical tool. At this point, the woman’s brain seemed to get back into gear and she drove off.

She later reported feeling shocked and unnerved about the whole episode but proud of the fact that she had kept her feeling sufficiently under control to keep her child passenger calm. She accepted the car was damaged but said it could be repaired. All that mattered was that both human beings were safe.

The incident was reported to the police and she managed to get CCTV camera footage of the car involved, although not the actual attack.

The CCTV information came from a local nursery and the staff there laboriously trawled through the video footage until they found what was required. They didn’t need to; they were just being good citizens. They also explained that the crime level in the area appeared to have risen in recent months and talked about there being an “increased sense of danger out there” as one (male) member of staff put it.

He wondered if it was another unimagined consequence of lockdown. Even though lockdown laws and rules are no longer in place, it seems there are still fewer people out and about than there were. And some of those who are resuming their normal lives remain fearful to a certain extent, even wearing masks outside on occasion.

That may be a trouble with imposing draconian measures and making them law. It’s hard to reverse them when you decide you want people to get back to normal. Those who obeyed the rules will worry that Covid has not yet gone away and may remain fearful.

Conversely, those who took no notice of lockdown may have been emboldened by the empty streets and it could be we are seeing the consequences of that lack of fear. And then fear breeds fear and so it goes on.

There is no moral to this story. It’s just sad. It seems to indicate we need to be careful to speak only to those people we know or recognise. Even an attempt to be helpful might be misconstrued. And that’s not a satisfactory way of living. We human animals need to connect and remain connected, as this painful pandemic has shown. We need adventures and fun and we need to take risks if we’re to have a life worth living. Closing down has not been good for us.

PS: I’m adding a small postscript to the story and that is the police have yet to come back to the woman who was the victim of the crime. She’s been told it’s unlikely they will because they are forever short staffed and don’t have the manpower to follow such incidents up.

She did argue that most criminals started small and got bigger and brave the longer they did the work and got away with it. She felt she was unlikely to be affected by the same crime twice but worried that the four young criminals she’d come across might, if not stopped soon, become even more violent in the future.

One police officer did assure her someone would come back to her and collect the USB which records the evidence for which they’re looking. A police constable has been assigned to the case and will be in touch with her when he’s back on duty. She tells me she’s not holding her breath.

Photo 1: Will Creswick on Unsplash