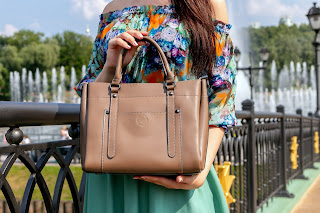 How are you about handbags? This, gentlemen, is not just a question for females. Anyone who aspires to understand what the other sex (gender) is like, needs to know about handbags. A handbag is so much more than somewhere to store necessary objects while moving from one place to another, it’s more like an ever-expanding life’s work, a container of it, in fact. Without it, a person can feel bereft.

A long, long time ago, a friend of mine’s mother explained to me how handbags were there to oppress women and keep them under control. I remember feeling surprised at that idea, particularly as it came from a lady who was a generation on from me and who I wouldn’t have expected to speak in such a feminist way. I was the young deserving feminist after all.

Years later, her words came back to me as I ran for a bus/tram in the eastern part of a now reunited Berlin, slip-sliding my way across the snow and clutching my shoulder bag as I ran. I caught the bus - just - but remember thinking how much easier it would have been to run with both arms free, ready to either grab the handle of the bus or catch myself if I fell head first onto the ground if the ice proved too much for my balance.

I had time to reflect on this once again this week after experiencing another handbag disaster.

I had taken my own particular style of Pandemicitis into account as I prepared for a next-day outing. Clothes laid out, provisions packed, entertainment planned, etc. and the next day all worked beautifully. In fact, I was early. What a great sense of achievement and superiority I had and I was in such a good mood.

That lasted for a further 40 minutes, until I went to find my phone. It was missing, along with the container in which I had placed it, together with my credit cards and purse (in case of being able to spend cash) and mask and lipstick, to repair damaged caused by the wearing of a mask. In other words, I had left my handbag at home.

My feeling moved seamlessly from my pride at being ahead of myself and so professionally in control to one of bleak despair. “How could I have been such a fool? Why hadn’t I checked and double checked? How can I possibly look after others when I can’t even manage such an elementary problem?” And so it went on.

Small charge (all this, by the way, complies with coronavirus restrictions) was bundled up into the car and we made the reverse journey back home. I was edgy and finding it hard to concentrate and reminded a little of what physical feelings the effects of withdrawal can bring.

The return journey (third time within the space of 90 minutes) was quite different. I was relaxed, cheerful, chatty and even able to attempt to sing along to my companion’s small-scale musical needs.

In other words, I was back to being the person I usually am, with the only proviso being that, for now, I seem to have officially become an airhead. My brain more often than not seems to be completely empty.

Some may argue this is an age thing. It may be but it’s curious how it’s affecting so many people of different ages so suddenly.

Personally, I’d suggest it’s more likely to be connected with the haphazard lifestyle we’re currently experiencing. It seems to me as though we have no longer have a centre of gravity - either in the workplace or outside, we have no fixed agenda and, possibly worst of all, we have no idea when all this is going to end. And humans, as I have been reliably informed, cannot bear living with uncertainty.

I wrote last time on the ups and downs of of living in the moment and, to a certain extent, this is a continuation of that theme. My 10-months’ experience of living in the moment seems to have closed down that part of the brain that deals with planning, future and all that comes with being an adult. It was fun for a while, but I still want to be in charge of my own destiny while I can.

There is hope of an ultimate end to lockdown, with the vaccine potential moving ever closer although it seems we still have some months to go.

So, while I wait for my jab, I’m going to aim to return to full adult mode, listening to my gut instinct, being completely present in my body - that means being aware of your whole self: head, shoulders knees and toes and the bits in between - concentrating on the job in hand and taking this time to prepare for the future when I get my life back.

Meanwhile, until then, I’ll keep my handbag chained to my wrist.