What A Chinese Banquet Can Teach Us About Working Together

I was lucky enough to be invited to a (late) Chinese celebration to mark Chinese New Year.

I was a bit apprehensive - I only knew the person who’d invited me - because I’m not as informed about the culture as I feel I should be and had very little idea what to expect. I try to embrace change and look positively towards the unknown but I have to admit it can sometimes be challenging.

Fortunately, the company was kind and those fellow diners at my table did their best to include me as they told fascinating stories of their time in the Far East.

The dinner - a banquet really - was presented in a traditional Chinese way. That is, with a revolving glass table that sits on the table top and which can be turned in one direction or another so that each diner helps themselves to a dish.

The dishes are plentiful and intended to be shared. The point of the New Year dinner is to celebrate family and friends, to be thankful for what you have received and to combine and share your provisions with grace and goodwill. A great deal of thought goes into the food and it is important to be aware of the giver’s generosity and to honour the guest in attendance.

It was easy to acknowledge and be grateful for such a delicious dinner. It was so enjoyable it will remain in my happy memory bank for some time yet.

But I found another thought creeping in as I was enjoying my fare and that was how efficient the system of distribution was. The moveable plate went both clockwise and anti-clockwise and you could see who was helping themselves so there was not a chance of either missing out or accessing your particular choice because you simply turned the style in your direction of travel and, hey presto, there it was!

It did come unstuck just the once and that was when a guest was helping herself to a dish one side and a fellow guest on the other - who was talking intently to his companion - began to turn the platter in his direction. He was quick and it happened so fast that the first guest still had her hands in the air clutching at the serving spoons with a slight sense of panic as the table moved away from her.

Delicious dish carnage was only just prevented by a quick intervention from another guest who managed to gain a good grip of the revolving glass and stop it moving. Apologies followed and honour was restored.

That episode brings to mind the plight of cars, traffic lights and roundabouts. If a driver approaching a set of traffic lights just before a roundabout stops his/her car when the lights go red, the traffic from the right-hand side will be able to flow freely, either turning left and going away from the roundabout or turning right to move further into it. 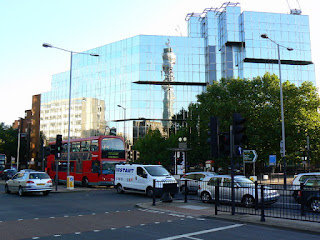 If, however, the driver - and the one behind - continues crossing the line just as the red light appears when their way forward is not clear, the problems start. If it’s busy, that leaves those drivers on the right blocked and unable to move. As the queues snarl up, so does the frustration and the fury. And all for what? The chance of reaching your destination a minute or two ahead of time. Instead, the likelihood is that you - and everyone else - will be stuck in stop-start traffic for a great deal longer than you’d planned.

You may have heard of Stanford University Professor Walter Mischel’s 1972 experiment on pre-school children and their ability to hold out for a culinary reward. Some children gave in to temptation quickly while others were able to contain themselves for a while longer. The children’s progress was followed over the years and those who could hold out the longest were found to do better throughout life than those who gave in to the first temptation.

Research has moved on and a 2020 study reported in US publication Greater Good goes further and finds that children do even better in this test when they cooperate. The study put two children together in a room, gave them a task to do and left them with a biscuit and permission to either eat it or wait until the researcher returned and then get another one. The study involved children from industrialised Germany and children from a rural community in Kenya to see if there might be a cultural difference. The results were the same. Those children who worked together were able to delay their own gratification for longer showing, the researchers said, that humans found working together for a common goal to be more enjoyable than going it alone.

And that brings me back to the revolving table at the Chinese banquet. It works so well. If only we could remember it’s not just about us serving ourselves, but about sharing with others.