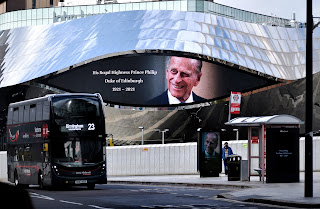 I was driving across a London bridge going from south to north when a police motorbike outrider - coming from east to west - drove up ahead of me and decisively indicated for me to stop. I did. There was no messing with that man.

Soon after, another outrider came by and, seconds later, a Range Rover passed speedily by, driven by someone who I recognised as a “minor” royal.

If I’d been part of the Twitterati gang, I’d have parked up and done a quick and concise indignant rant about how wrong it was that such a royal was taking up police time and my road space, etc. etc.

As it was, I just thought it and drove on.

At 12 noon, I was still in the car with my social-bubble permitted passenger and listening to some trivial and fairly bland radio programme. The notification from Sky News came through around 12.06 via my friend's watch. Prince Philip had died.

I experienced two sudden and unexpected emotions. On a personal level I was surprised and shocked at the news. That surprised me even further when I reflected that I’d known he was ill and he was also 99. The death of a man of that age should neither shock nor surprise me. However, that’s the point with emotions, they are not always what you expect them to be. 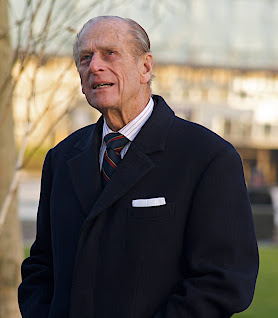 Professionally, as an ex-news journalist, I was on it. It was exciting. Breaking news, adrenalin-pumping stuff and a “proper” story, not something extended well past its sell-by date to fill a 24-hour news agenda.

And how had Sky got it first rather than the BBC (I was listening to a BBC radio station)? A story of such magnitude and Sky had beaten the BBC to it. Impressive. I asked my passenger to twiddle the knobs and see if it was on any other BBC radio station. It seemed not. But, just then, the BBC’s separate airwaves dissolved into one as the BBC announced the news with its own inimitable gravitas, followed by the playing of the National Anthem.

At the sound of the National Anthem, I felt a lump in my throat and my eyes filled with tears. As someone trained to notice the emotional reaction of others, I was quick to reflect on my own and, once again, quite taken aback. I’m not a great fan of the National Anthem which has a dirge-like quality to my ears and I’ve never had that sort of that reaction to it before. It was all a little strange.

My journey had some way to go so I listened to stories told about Prince Philip by people who knew him or had some connection. I knew many of them already but some were new and made for interesting listening. I liked the one or two clips they aired of Philip himself talking. He sounded thoughtful and reasonable and far more of a “whole” person than the figure-of-fun I and many others had laughed at as we read about his various gaffes. I enjoyed the tributes and was glad of the time to listen.

Some time later but still on the journey (it was a long, necessary one of three hours), I thought back to the moments soon after we’d set out. The police outriders, the Range Rover, the “minor” royal and companion who were dashing from east to west via the Embankment.

That was the road to take if you were going off to the M3 or M4. The outriders supporting the driver and passenger were speeding through at 10.40am. Had they already heard the news and were hurrying to Windsor?

I don’t know, I’m never going to know but it is a bit of a coincidence.

And then I reflected a little more about how I’d have reacted if I’d had that Twitter account to hand. Imagine a self-satisfied, smug outburst with my thoughts on what royals should and shouldn’t do. Once I’d heard the news, I’d have felt embarrassed and, perhaps, a little ashamed.

I was reminded of the Biblical proverb along the lines of: “Fools rush in where angels fear to tread.” Reflection and thought before action seems wise.

Photo 1 by: Adam Jones on Unsplash