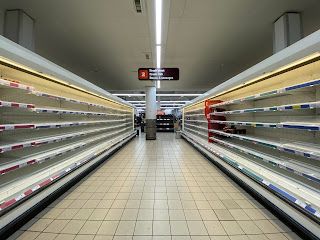 “It was the age of wisdom; it was the age of foolishness.” The opening lines from A Tale of Two Cities, written by Charles Dickens in 1859, sound a strikingly familiar chord today.
We have made extraordinary advances in science and technology but, at the same time, we have ruthlessly used and abused our environment, and we now find ourselves exposed to a global threat over which we have, as yet, no control.

This has led an unprecedented level of fear at a universal level, and the way we respond to that fear will be critical in how well we survive the corona virus pandemic.

Charles Darwin’s theories of evolution and the survival of the fittest have been interpreted by some as every man for himself.  But in fact, if we look at animals in the wild, and what we now know about the way trees communicate with each other, it is evident that survival is about looking after your community (the herd or the woodland) and that individuals are significantly more at risk if they act independently of each other and do not collaborate with their tribes.

Those who have emptied the shelves of supermarkets to stockpile for themselves are at risk of setting up a self-fulfilling prophecy, as they not only create the very shortage that they are anxious to avoid, but are also still vulnerable to contracting the virus and may have unwittingly deprived themselves of the very people they will need to look after them.

There is a fundamental difference between a survival gene and a selfish gene, and unless we can all recognise and respect that we need to collaborate in order to survive, I believe we will exponentially increase our chances of causing our own destruction.

While we have now been given strict orders from the Government as to how we should behave, specifically focused on what we should not do, I feel there has been little support or advice with regard to the mental health aspect of this epidemic.

For those people with pre-existing psychological disorders  such as depression, addiction, anxiety etc, being isolated can feel very risky and, in some cases, is actively dangerous.

The instruction to limit activity and freedom that the Government had to issue was not one that anyone wanted to hear, and it was predictable that there would be a wide range of reactions, ranging from denial to outright panic.

It threatened us all with being forced to radically change our normality on a daily basis while, at the same time, giving us no certainty of an outcome over which we had no control.

These are conditions that are very difficult to manage and they needed to be presented in a way that understood that fear would be likely to provoke resistance. Uncertainty and lack of control creates an immediate need for structure and support.

I believe it would have been helpful for a Government minister to have offered strategies to be put in place to help people manage on a daily basis. For example, it would be useful to explain how to maintain structure in our daily lives; (regular meal times, etc.); how to use the time that we are at home in a constructive way - learning a new skill, exploring new ways of contacting people and perhaps revisiting old friendships.

Failure to give advice in these areas has left many people without direction or purpose and has provoked anger and rebellion among some and, in others, impotent despair.

Fortunately, we have also seen very positive examples of people showing compassion and collaboration in supporting and reaching out to each together when, for the first time ever, we experience trauma on a universal basis.

This is a time, I believe, to take stock of our own choices and priorities and to question some of our decisions so that, going forward, we can perhaps, lead our lives in a way that is less driven by short term gain.

We could also understand and show more awareness of the consequences of our behaviour so that, in the longer term, we can better care for the environment we live in. By doing that, we can learn to take better care of ourselves.