Don't be fooled by the DSM-V 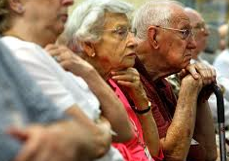 We can pretty much take it as read - indeed many of us may know first hand - that as we get older our brains start to slow down a little. Losing a name here and there, being a little slower to pick up on a complicated idea - this is known as par for the course. It has ever been thus.

So it is interesting, is it not, that the Diagnostic and Statistical Manual of Mental Disorders, Fifth Edition (DSM-V) the American Psychiatric Association's (APA's) definitive and globally adopted 'bible' which decrees what mental illness is and isn't, has introduced Mild Cognitive Impairment (MCI) as a formal diagnosis.

What this means, of course, in dollars and cents, is that MCI (the acronym serves to legitimise the notion of disorder and obfuscate the natural phenomenon of age-related forgetfulness) can be MEDICATED - that is to say, a drug can now be legitimately prescribed to treat this 'mental condition'.

Which makes the findings of a recent piece of research - the German Study on Aging, Cognition and Dementia in Primary Care Patients - all the more important. What it reveals offers encouragement to those who may be labelled with MCI as part of the fear-mongering, revenue-harvesting agenda.

As one might expect, patients were at greater risk of progressing from one course to the next along this spectrum if they had symptoms of depression, impairment in more than one cognitive domain, or were older.

So according to this study, in patients over 75 with normal, age-related 'slowing down' (henceforth to be known as the 'mental disorder', MCI), only a little over one-fifth of individuals actually progress on to dementia - or, to put it in positive terms, almost 80%, four in five, experience an improvement in cognitive symptoms or remain stable. In other words, MOST people. That's good news.

Of course, it remains to be seen how things will pan out once people with such normal cognitive profiles start being labelled MCI and being medicated - will the drugs induce dementia? Only time will tell. My suggestion is, if you notice you're becoming a bit forgetful, don't, whatever you do, tell your doctor - you may wind up on medication.

In contrast to this instance, where we see the DSM labelling normal as abnormal, we also see the reverse happening - the abnormal being labelled as normal. So, for example, in this latest edition of the DSM, we also see paedophilia being declassified as a disorder and newly described as 'sexual interest' (you can read our post about this here). And, as I hope you'll agree, the day paedophilia is legitimised as a bona fide predilection, as has happened now with the APA, is a dark day indeed.

Have you noticed this trend? What are your thoughts on the DSM-V? Is it serving to help doctors in treating patients with mental difficulties or not? Is there, perhaps, a different agenda? Whose is it and what is it? We need answers to these questions.