Why do we self-harm? 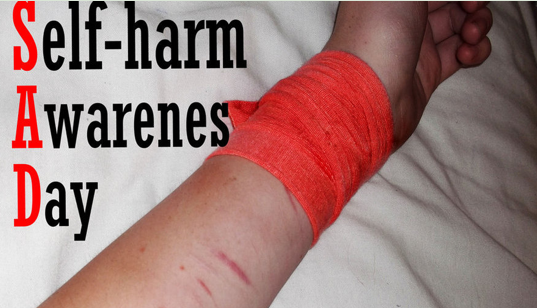 Self-harm, like so many physical manifestations of the growing psychological distress in our world, is on the increase, according to a new survey among young people conducted by four self-harm support groups, and referred to yesterday on Radio 4's The World at One. Figures from the NHS in England show that 11% more young people were admitted to hospital having harmed themselves during 2012 than during 2011, the piece revealed.

The report covered an interview with a girl called Chloe, who was 14 when she began cutting herself, and is now in successful counselling treatment.

Chloe described her former routine dispassionately - she would go to school, come home, go to her room and then cut herself, and remain in isolation from her family for the rest of the evening. She put down the cause of her behaviour to bullying and unhappiness at school and was able to make a clear association between needing to express the pain she felt on the inside by hurting herself on the outside. 'If you can hurt me on the inside, why can't I hurt myself on the outside?' she said to herself at these times.

This distorted notion of 'you're hurting me, so I'll punish you by hurting me too' will not be unfamiliar to therapists who will likely spot the projection involved in this maladaptive way of thinking and behaving. While the victimisation from class mates is obviously real, the attempt is actually to punish the parents - who, after all, will be most punished by living with self-harm in their midst?

Notwithstanding this well-known but little understood psychodynamic principle, according to the survey, bullying is the number one reason given by young people for starting to self-harm, along with a sense of feeling alone in the world. This latter point is significant - why would a child feel alone in the world if the family is operating in the way it's supposed to?

Rachel Welch from selfharm.co.uk, one of the groups responsible for the survey also points to the role of smart phones and tablets in providing 'inescapable' victimisation - with 24/7 connectivity, you're only ever a beep away from the next spiteful remark, she says.

Surely, that's true, but what ever happened to formation of fortitude. something I seem to recall having to cultivate in response to my own long distant and catty adolescence. Learning to understand that a spiteful comment says more about the persecutor than the victim was part of my formation - unless we come to understand this, we will forever remain victims of a naturally dysfunctional world.

Let's hope Chloe's counsellor is delving deep and helping her identify exactly what was driving her need to punish her parents in this tragic and misguided way - rather than simply vilifying the bullies, who are themselves victims of irresponsible parental nurture.

Email ThisBlogThis!Share to TwitterShare to FacebookShare to Pinterest
Labels: self harm, self-harm