Putting On Your Big Boy Pants 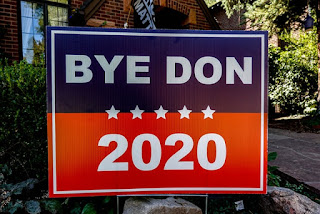 The best quote of the US presidential elections surely has to be: "What the President needs to do frankly is put his big boy pants on.
It was said by Philadelphia mayor Jim Kenney as he encouraged Donald Trump to concede defeat as President-elect Jim Biden was declared winner.

I don't need to go on. If you have an interest in political affairs, you'll know the rest. If you don't, you won't care.

But what an expression. What a picture it evokes. I know pants is the  American word for trousers so it’s not quite as much fun in their eyes as in my mind (I envisaged Superman-style pants) but even so it tells it as it is. It is time for Mr Trump to grow up and accept the situation as it is.

Mr Trump’s presidency has been fascinating because it seems extraordinary that a late middle-aged man (74) gained the highest office in the US while never appearing to be anything but a giant child.

He spoke simply and clearly without the use of big complicated words; his beliefs appeared to be black and white and, if anyone criticised him, wow was he cross! I'm keeping my language simple, as he did.

He kept everything simple, dismissing North Korea’s President Kim Jong-un as “rocket man”; taking a different view on global warming: “It’s freezing and snowing in New York - we need global warming” and making splendid boasts of his achievements and the reason why he was so popular. At one time, he memorably summed himself up, saying: “The beauty of me is that I’m very rich.” 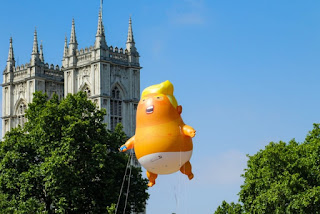 And 70 million Americans still voted for him on election day, making the race much closer than expected (Joe Biden has so far won 74m votes). This man-child that is Trump still has a great deal of appeal.

I didn’t expect him to win first time round. I saw him as the larger-than-life Apprentice show boss with an interesting head of hair and an orange skin tone. He seemed to me to be quite a laughable character, not someone to take seriously.

I am still trying to get my head around his appeal as a politician. Is it an aspirational thing - if he can do it, so can I? Is it that his self-belief is almost hypnotic or do people really believe he can do what he says he will do? Building a wall between Mexico and the US, for example, and making Mexico pay for it.

Certainly, he gave people hope when they felt they had none. He successfully appealed to the workers whose jobs had gone as globalisation crept in. Trump was the visual epitome of raging against the machine, I suppose.

He had a fair degree of political cunning, assuring supporters he’d “drain the swamp” and root out the perceived corruption in Washington. In reality, I’m not sure how well he did on that.

He use the phrase “fake news” to great effect and that helped block rational argument. You were either for or against him. A goodie or a baddie there was no in-between bit as far as he was concerned. In therapeutic terms, it's known as black and white thinking and means an inability to see a way of bringing together positive and negative qualities and only able to see in absolutes - there is no shade of grey.

And that is what we expect from children. Something is fair or not in their eyes. If someone is unkind to them, they bear a grudge, they want to hit back and punish the baddie. No surprise there. But surely that’s not something we expect from a president.

The surprise for me is that so many adults chose to vote not once, but twice for this man-child. If it is just because of his appeal, then I am quite lost. While, personally, I find his utterings and performance highly entertaining, I’m not entirely confident that President Trump was the ideal man for the job. But how can 70 million voters be wrong? 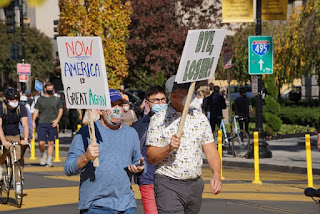 There is a glimmer of hope.
I read that it’s more complicated - to me as an outsider at any rate - than it may seem. Some more in the know than I, say those 70m Americans who still voted for Trump had a different reason. They voted less for Trump the man and more for the values of the party for which he stood.

I understand calls to “defund” the police and the increasing normalisation of identity politics and the “wokeism” which comes with it played a large part in the decision of those who voted for Trump and against Joe Biden and the Democrats - something about which senior Democrat politicians are continuing to warn.

Phew, that’s a relief. Those 70 million people who cast their vote for the Trump this time around made a reasonable and rational decision and one I can respect.

I was beginning to get slightly worried that the people of the Western world had become so used to a man-child ruler that they wanted him to remain as president.

Looks like we're all ready to put on our big boys pants.