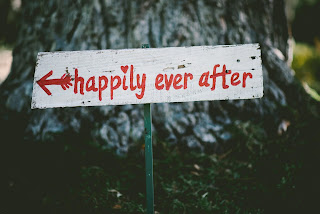 Are you a determined person? Are you someone who prides yourself on getting a job done, on never giving up, on staying loyal come what may?

Or are you a person who might persevere a little less than others (let’s not say fall at the first hurdle), someone who is prepared to put so much effort into a project but not much more than you consider worthwhile and can walk away, with barely a backward glance?

Someone told me recently that they had just marked their 40th wedding anniversary. I congratulated them, saying how impressive it was, particularly nowadays.

That threw me. Why would someone be marking - re-marking - on an event that happened decades ago and which I imagine might be something of a sore point?

Sometimes a date triggers a memory, reminding us of an occasion that was important to us at one time. It could be a wedding, a birthday (if it’s ours, that one usually stays with us throughout life) or maybe an anniversary of a death of someone dear to us. But, as the years go by, the dates that once were important to us because of a particular meaning, fade a little, particularly if the marriage has ended.

So, the sharing of this 40th anniversary troubled me. What was behind it? Had this lady moved on at all? What was her present life like that an event of so long ago remained so real that she was remembering it in detail all these years later?

We discussed it further and it seemed as if her wedding day had encapsulated all she wished for in her life. Her early family history had been difficult and she saw the marriage - launched by the joyous occasion of her in the starring role on the wedding day itself - as the beginning of a new life where all painful things would end and she would thrive and grow and all her dreams would come true.

Unfortunately, as so often happens when one person is looking to another to change their world and make everything all right, she picked the wrong groom. He was not the right person to be the repository of her dreams and it was obvious to everyone but her that the outcome was not going to be good.

At this point, I would suggest the response from a “healthy” adult would be sadness, disappointment, maybe anger, guilt, rejection (depending on who instigated the break up) and perhaps anxiety about the practical aspects of the future. After a period of time, however, I would expect the person to pick themselves up, brush themselves off and start all over again.

You may notice I have used a number of well-known phrases. Bear with me.

Most of us are taught such sayings at a very early age and sometimes we swallow them whole. If at first you don’t succeed, try, try again (determination pays) ; you’ve made your bed, now you must lie on it (be stoic in adversity); the early bird catches the worm (the go-getters get the prize), and so on. Some of the phrases we swallow whole as children move with us into our adult lives, sometimes to our detriment.

It appears my real-life Lady of Shalott suffered from an excess of proverbs in her childhood and had taken them too much to heart. She remembered a great many of them.

She told me one story from school in which one teacher said she would never be good at sewing. Another teacher - who knew the girl better - said: “Ah yes, but you haven’t reckoned with her determination.” The delighted schoolgirl took the story to heart and marched into adulthood believing determination could conquer all. Unfortunately, the downside of that was, when her marriage failed within a few years so did she.

This particular person was unable to put her past to rest, even with support from friends and those in the family who loved her. That, unfortunately, had tinged her life with wrong choices and sadness and the anniversary brought it all back.

We spent a long time working on these internal beliefs, sharing her reflections on her  observance of the not-the-marriage anniversary and allowing her to understand that lives do go wrong despite the best of intentions, disappointments happen and mistakes are made.  She is still working on this but tells me she feels a little lighter. I am hopeful of a happy ending to this story, albeit perhaps 30 years longer than I might have wished.

My own reflections on this leave me feeling the key is recognising we are not always to blame and, even if the mistake is ours, we need not believe we are a lifelong failure because of it. Perhaps the best way to make amends - if there is a need - could be to learn from our past and use that knowledge to try to live a happier and more fulfilling life.

Grieve, by all means. Mourn for your lost hopes and dreams, but not for too long. Not for 40 years. Move on.

That brings to mind another saying: “It’s never too late.” That one’s a good one. Worth remembering.