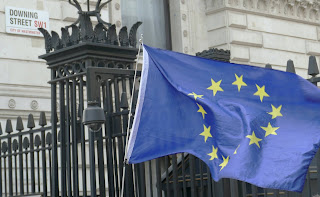 It is four years since the referendum and Britain is now finally out of the EU - for good or ill, depending on your viewpoint. January is a traditional time for looking forward but this year is like no other in many people’s lifetime; we are uncertain about what it is we have to look forward to. Brexit still remains a very sore subject for almost half the population so I am using this blog to reflect on my own inner conflict.

Discussions about Britain’s “divorce” from Europe started in 2016 and the divorce term was quickly adopted nationwide. I argued the term was inaccurate; it was much more like deciding to leave a club we had once wanted to join but now decided that it no longer suited us and it was time to leave it behind. A bit of regret, perhaps, even some uncertainty but it wouldn’t take long to get over it. It’s the way life is.

I was wrong. The emotions this departure leaves us with are every bit as powerful as a divorce. For those who wish to remain - the abandoned partner - there is disbelief, fury, confusion as to how something started with such optimistic has ended in such abject failure. Very possibly, there is also a very strong desire for revenge. We, representing the EU lover, really want the person who has wronged us to suffer. Believe me, we say, they will.

We rant on social media; we block friends who take the other’s side and we look forward with glee to proving that it’s all going to end badly. No matter how long it takes, it will.

The other side - the one that got away - is euphoric. This has been a long time coming. The future is blue-sky bright and the horizon stretches for miles in front of us. This is a blessed new dawn.

Neither view is entirely accurate of course.

The EU, for example, is not perfect. Most of us have complained at one stage or another about its red tape bureaucracy, the fact that one size doesn’t necessarily fit all or we’ve just held on to our particular prejudice against a fellow member. Now, after Brexit, we look back at it all with a rosy glow.

For the Brexiters - note the replacement of the Brexiteer word, which seemed to have a bit too much of a swashbuckling sound to it - they carry the memory of a once-great maritime power with an empire to show us we once ruled much of the globe and we can do so again. However, everyone will be aware times are different now and, as a geographically relatively small independent nation, we could be in for a rough time.

There will be troubles ahead for both parties and the one who will do best from life will be the one who can accept and make the best of what comes next.

So, back to the divorce analogy. The financial battle is over, the welfare of the children remains paramount to both parties (so we are told and so we must believe) and they will no longer be used as a bargaining chip for future financial negotiations. All we need to do now is move forward and get on with our own separate lives.

That's the rational, logical and reasonable part of the process. Unfortunately, it's mixed up with emotions and somehow they are always harder to keep under control. A public promise was made to stay together in good and bad times and someone has broken that promise and the grieving partner has been made a fool of - the instigator must be punished. The surging fury and hurt bubbles up to the surface for no obvious reason and we lash out, and the other person lashes out in response. And so it goes on. Unless we find some way of managing those uncontrollable feelings, our lives could be stalled for years, to our detriment.

I have seen clients who stay in this state for far longer than they see me. For some, there is an attachment to such a state of misery that goes way beyond the real value of the marriage. Sometimes I, as an outsider, wonder how they had held on so long. For others, it is all about the investment, the hopes and the dreams. It is about the despair when the marriage comes to an end and all those dreams have gone and there is nothing left.

Sometimes the process of hearing their hurt is a form of healing. Talking it out does help. But for any psychotherapy to be successful, the client has to want some kind of change to take place. If they are not a willing participant, the process cannot work.

We are still at the very beginning of the Brexit road. We remain a polarised people. The isolation of Covid makes it harder for us to talk this out and our beliefs become even more entrenched.

I’m told there is a clause in the leaving treaty that allows for another re-examination of the situation in four years. For those feeling hopeless, this may represent a chance to reconsider the initial decision. Or, in four years’ time, it may be clear that leaving was the right decision after all. Who knows?

What I do know, with quite a degree of certainty, is that holding on to such a level of anger and disappointment is not good for anyone’s mental health. All of us need to find some way of moving on, for now at least.

Photo 1 by Call Me Fred on Unsplash

Photo 2 by Cinthia Aguilar on Unsplash