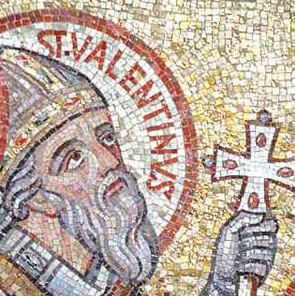 I've been trying to figure out the connection between the original St Valentine, a Roman priest who was beheaded under Claudius II on 14 February in the year 270 AD, and the restaurant-and-rose-fest we practice every year in his name. Maybe it has something to do with him sheltering Christians from persecution and, in losing his life for their sake, demonstrating perfect love.

Now, I'm not sure how many of the couples in candlelit restaurant windows on Valentine's night would lay down their lives for their paramours; with the wind behind them, they won't have to. They will simply be able to bask in the bliss of the rather more comfortable derivative passed down by St Valentine - that is, romantic love.

But what is romantic love and how does it impact our mental health?

It would appear that romantic love is certainly good for overall health. This was demonstrated by a study of 3,000 people, aged between 57 and 85, who reported that being in a satisfying romantic relationship improved their sense of wellbeing. Participants in close relationships were more likely to report that they were in "excellent" or "very good" health than merely "good" or "poor" health.

Such positive thinking, according to the Mayo clinic, has all sorts of positive knock-on effects for objective measures of physical and emotional health, including reducing the risk of depression and protecting against the common cold.

And indeed, it's hard to argue against the affective pleasures of being in a good romantic relationship (whatever exactly that is!).

But is all romantic love good for your mental health?

Show up at any 12-Step meeting catering to the needs of people suffering from love addiction and I'm sure you'll get a different response to the one you'd get from diners in the hypothetical restaurant above.

Because what passes for love in this case is usually neurotic attachment, in which things can go horribly wrong. When the reason for being with another is to assuage unconscious feelings of discomfort or inadequacy (which usually hail from the family of origin), life is not all beer and skittles.

The typical love addiction cycle waxes with periods of intense engagement (usually pleasurable, at least on the face of it), then wanes with one or both partners entering into avoidance. It's a roller coaster ride that can get very messy, especially when the object of attachment (i.e. one's partner) is removed from the scene, as happens in a break-up.

Which leads on to the question how do people fare in the mental health stakes when there is no romantic love? Should singletons gaze through that restaurant window with sadness and longing?

Not necessarily! According to the NHS, having a healthy network of friends can have many of the same positive benefits as being in a romantic relationship. And reported on the same platform, a longitudinal study of almost 700 older nuns found that many are keeping fit and mentally agile well into their 90s and past 100!

Which brings us back to St Valentine. He clearly understood that love is not a feeling but an action (or perhaps a committed set of actions). As M Scott Peck in his classic book 'The Road Less Travelled' writes 'Love is the willingness to extend oneself for the purpose of nurturing one's own or another's spiritual growth'. I do like that definition.