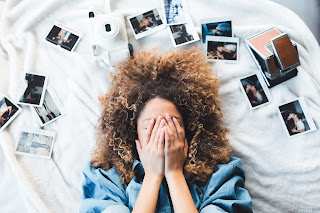 Whichever direction your hand has taken, you are in good company.

Recently, Stanley Johnson, father of Prime minister Boris Johnson, defiantly ignored his son’s instructions as head of the British government to stay home unless it was absolutely necessary to travel and left for his holiday home in Greece. Worse still, he circumvented Greece’s own barrier to UK travellers by going via Bulgaria. In case you’d missed it, he posted his expedition on his Instagram account.

Talk about being an embarrassing relative.

Being impartial - as far as one can be with politicians - I feel a bit of sympathy. Then I remember that some of Mr Johnson junior’s personal decisions might have embarrassed his own children. Oh dear, the irony.

Across the pond, we read that POTUS Donald Trump has spent all his life trying to be “good enough” for his successful and ambitious father, Fred, following the death of his older brother, who was an alcoholic. Some accounts of Donald in his earlier, less successful life, suggest a kindness in him his critics cannot see today.

Only those involved know the “real truth” of what goes on in families but, from a psychotherapy perspective, it is clear that some parents continue to play a significant part in their children’s lives long after they have reached adulthood.

Ideally, the role of a “good enough” parent is to bring their offspring through the years of babyhood, childhood, teenage years into a fully fledged adult. Psychiatrist and psychoanalyst John Bowlby described a successful outcome as a secure base. Fully fledged is an evocative term. Like a bird, a successful adult will be able to make his or her way into the world and, in turn, begin the process of family making of his/her own.

The primary carer of a child up to the age of around six will be everything to that child. There may be some battles of will along the way as the child begins to assert itself but the carer - let’s say parent for the sake of argument - remains a Godlike figure. S/he is not yet seen to have feet of clay.

From six upwards, a child will begin to identify more with the parent of its own sex and so it goes on as the child begins to develop into its own person. The teenage years and the rebellious phase, frustrating as they can be, are necessary because that time of questioning the adult examples means the offspring is learning to consider and decide for him/herself. The teenagers needs to push against something/someone in order fully to become themselves. If, they are given space and allowed to make their own choices (with appropriate boundaries and care in place) the result will be a fully fledged adult, a person who will be equipped with a pretty good navigational compass to ride the stormy waters of life.

That is the theory. Unfortunately, it is not always like that. As Leo Tolstoy expressed it so movingly: “Happy families are all alike; every unhappy family is unhappy in its own way.”

There is a caveat here: I do not believe any well-meaning parent intends to do harm to their child. It is just that sometimes their own beliefs and desires get in the way seeing what is in the best interests of their child.

Sometimes, for instance, parents have plans for their children that forget to consider the separateness or individuality of the child. So the parent who always wanted to be a doctor - but isn’t - is determined their own child will become a doctor, regardless of the child’s own desires or talents. Or the parent whose love is conditional on the child complying with what is expected of it. The love may be withheld if the child disobeys. No child wants that so they may grow up conforming and subjugating their own needs in place of keeping the beloved parent happy. That rarely ends well because, eventually, the conflict between the (now inner) eager-to-please child and the rational, free-thinking adult they still wish to become, will be unresolvable. It may lead to the development of a “false self” where the person presents themselves as someone who, inside, they are not.

Perhaps we need to remind ourselves that we still have the right to be individuals even within our family group. As an experiment, watch a family of adults get together and see how each person reverts to the role they either took for themselves or were assigned to as children. The older one may boss, the younger may whine while the middle ones may go quiet as they realise no-one’s paying attention. Then take each individual out of that group and watch again how they are. They - and their roles - will be different, I can assure you, as long as they’ve been allowed to fledge.

Back to the embarrassing relatives at the start of the blog. Isn’t it interesting that it seems to be the older adults who are into relative-shaming here? It used to be the other way around. Ah well.

So next time you want to hang your head with shame when a relative publicly does something you had much rather they did not, remember they made their choice as an individual, it was not a reflection of you. Or, at least if you’re part of the band of happy families, it shouldn’t be.