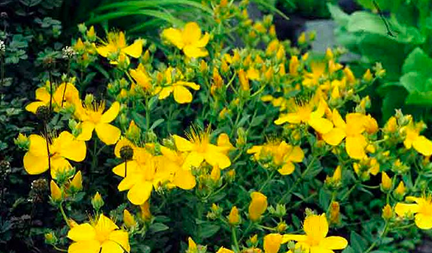 St John's Wort has, for centuries, been used as a treatment for mental disorders and nerve pain. Named after St John the Baptist whose feast day on 24 June coincides with its full bloom, its five yellow petals are thought to represent a halo, and characteristic red sap the blood of the martyred saint (St John the Baptist was beheaded for calling into question Herod's morality).

It seems there is good justification for its use. A review of 29 trials in 2008 concluded that, in major depression, St John's Wort is superior to placebo, as effective as standard antidepressants and exhibits fewer side effects than standard antidepressants - not bad going for a herbal remedy. Indeed, it is currently the number one alternative treatment for depression in the USA, a common resort for those who are not comfortable with formulations like Prozac.

But a new study published in the Journal of Alternative and Complementary Medicine suggests that care should be exercised when choosing to take, dispense or prescribe St John's Wort. Though a natural extract, it is proven to interact with many commonly prescribed drugs, resulting in impaired effectiveness and, sometimes, treatment failure. Treatments with which it interacts include the contraceptive pill, anticoagulants, some chemotherapy drugs and antihypertensives.

Lead author of the study, Sarah Taylor, rightly observes that 'patients may have a false sense of security with so-called 'natural' treatments like St John's Wort'. What most people don't understand is that just because an agent is derived directly from nature does not mean it is any less potent than a synthetic pharmaceutical - one only needs to look at the case of digitalis (extract of foxglove and powerful heart anti-arrhythmic) or aspirin (derived from willow bark) to prove this point.

This latest research (conducted in the city of Winston-Salem, North Carolina, from medical records compiled between 1993 and 2010) sought to quantify the scale of the potential problem, by looking at how often St John's Wort was taken with other medications, and how often the combination might have been harmful.


In an astonishing 28% of cases, St John's Wort, taken with another drug, may have caused problems for the patient, though this is probably an underestimate, since patients often do not report on the use of natural remedies.

With results such as these, it's little wonder that France is now banning the use of St John's Wort, and that the United Kingdom, Canada and Japan are introducing drug-herb interaction warnings on packaging.

The good news is that St John's Wort seems to be helping patients with depression and, if it comes with the benefit of fewer side-effects than prescription medications, this can only be a bonus. The greater the awareness of its broader impact (with particular reference to drug interactions), the greater its potential as a safe and viable alternative antidepressant treatment.