Asda, Halloween and who's the mental patient? 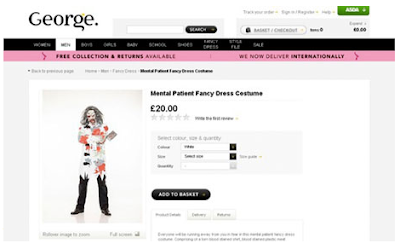 Yesterday, Asda was criticised for launching a Halloween costume for online sale, labelled 'Mental patient fancy dress costume'. As you can just make out from the screen shot of the offending item, the model is covered in blood and wields a meat cleaver - charming.

Amidst all the hoo-ha surrounding the offence being done to mental health patients because of this, what I find interesting is that no-one has raised so much as an eyebrow at what seems to me even more disturbing - the alarming spectacle of violence referenced by this, at best tasteless, party costume. I repeat, 'covered in blood' and 'wields a meat cleaver' - can anyone hear that or have we become so numb to such grotesque ideas and images that nothing disturbs our serenity (or should I say denial).

I contend that the increasing incidence of images, items and concepts like these in our everyday lives is a reflection of something we should be far more concerned about - such visions ultimately make mental patients of us all by inuring us to images of the obscene and violent, normalising them and even turning them into a so-called laugh.

Here's an idea - why don't we market Al Shabab outfits and sell them for Halloween in the wake of the recent Kenyan shopping mall atrocity - you know, just for a bit of fun? Given that Halloween is now a popular date in children's diaries, the need to recognise what we're doing is all the more stark. Or perhaps we should wait until the meat cleaving and blood letting starts among our young adults (and we've already seen it on the streets of South London), then introduce education around it into the school curriculum?

On a similar theme, a recent article by James Delingpole on the shocking reality of the content of the new Grand Theft Auto V game, gives a horrifying insight into this brave new world of explicit and gratuitous images of human suffering and violence. Horrifying, that is, to those who are still able to be shocked by the depravity routinely touted as entertainment in these times. I urge you, for the sake of our common humanity, to take a look at James' article.